Tesla is offering to pay for and ship a crucial medical component being used in the fight against the coronavirus pandemic.

CEO Elon Musk announced on Tuesday: “We have extra FDA-approved ventilators. Will ship to hospitals worldwide within Tesla delivery regions. Device & shipping cost are free. Only requirement is that the vents are needed immediately for patients, not stored in a warehouse.”

Ventilators are life-saving devices that assist breathing and are an especially critical device for treating a respiratory infection such as COVID-19.

Notably, these ventilators aren’t the Tesla-produced devices Musk previously announced. Instead, these are part of an “oversupply” of “1,255 FDA-approved ResMed, Philips & Medtronic ventilators” that Tesla purchased last week for distribution to hospitals in the US. 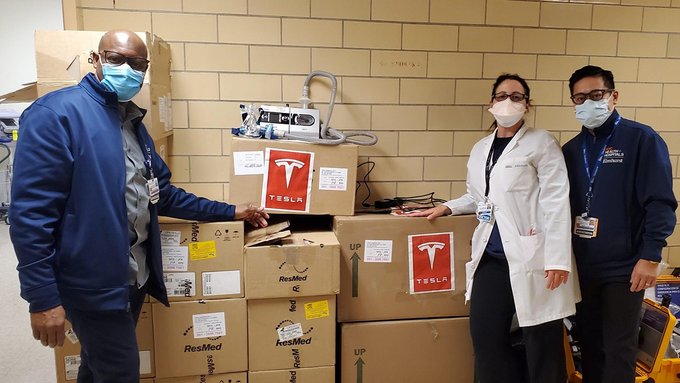 At least some of Tesla’s purchased ventilators are already in New York City, as seen above in a photo at the Elmhurst Hospital in Queens.

The Queens hospital where Tesla shipped ventilators became a flashpoint after a video shot by a doctor within the hospital was widely shared. In the video, the doctor said, “We don’t have the tools that we need.” New York City has been hit particularly hard by the coronavirus pandemic, with more 43,000 confirmed cases and over 1,000 deaths as of April 1.